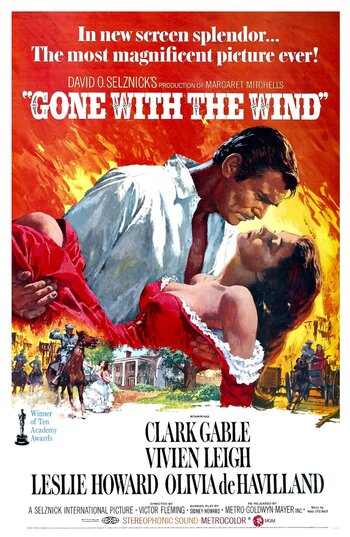 "Frankly, my dear, I don't give a damn."
— Rhett Butler
Advertisement:

Gone with the Wind is a 1939 romantic MGM-produced epic about Scarlett O'Hara, an indomitable and ruthless Southern Belle, stretching from just before The American Civil War through much of the Reconstruction era. Adjusted for inflation, it is the highest-grossing movie of all time.

Produced by David O. Selznick and filmed between December 1938 and November 1939 (having been in development since just after the book's publication in 1936) and released in December 1939 in glorious Technicolor, it starred Vivien Leigh as Scarlett, Clark Gable as Rhett, Olivia de Havilland as Melanie and Leslie Howard as Ashley. Interestingly, director Victor Fleming was also the director of another legendary Technicolor film from that year — The Wizard of Oz.

The original novel was written by Margaret Mitchell, and its massive popularity naturally led to demands for a sequel. In 1991 Mitchell's estate licensed Alexandra Ripley to write the continuation novel Scarlett, which was adapted into a CBS miniseries three years later. There's also two licensed prequels - Rhett Butler's People, telling the original story from Rhett's perspective, and has a different ending to Scarlett, and Ruth's Journey, about the life of Ruth, aka "Mammy". Then there was the unofficial sequel The Winds of Tara, which was published in Australia to get around copyright law. Bear in mind that this has another ending for those who are not happy with Scarlett or Rhett Butler's People. And finally, there is Alice Randall's The Wind Done Gone, written in African-American Vernacular English from the point of view of Scarlett's mixed-race half-sister Cynara, whom she never notices in the original novel, and whom Rhett himself takes as a lover. The Mitchell estate sued Randall, but the case was dropped when the court ruled it was protected under the First Amendment as a Parody. (In the strict legal sense as a commentary on the original. It is very much not a comedy.) Notably, none of the original book's characters are explicitly named, only referred to by initials and nicknames.

I Don't Give A Damn

Rhett tells off Scarlett in an epic way, especially considering that back when the Hays Code was a thing, saying damn in a movie is pretty much considered a precision F strike in on its self.

I Don't Give A Damn

Rhett tells off Scarlett in an epic way, especially considering that back when the Hays Code was a thing, saying damn in a movie is pretty much considered a precision F strike in on its self.