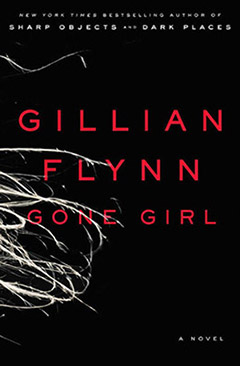 "When I think of my wife, I always think of her head. I picture cracking her lovely skull, unspooling her brains, trying to get answers. The primal questions of any marriage: 'What are you thinking?', 'How are you feeling?', 'What have we done to each other?'."
— Nick Dunne, opening narration.
Advertisement:

A 2012 thriller novel by Gillian Flynn about a married couple, Nick and Amy Dunne, whose marriage has slid from picture-perfect to downright frosty over the course of five years. Then, on the morning of their fifth anniversary, Amy disappears. There are signs of a struggle, and Nick soon realizes he's the prime suspect.

Nick narrates the investigation of Amy's disappearance, while in alternate chapters Amy's diary tells the history of their relationship. But there are hints that some things have been left out.

A film version directed by David Fincher, starring Ben Affleck and Rosamund Pike, was released in 2014.

Please note that much of the suspense in the book (and the movie) comes from the numerous twists and turns. A majority of the tropes below are completely spoilered out, and thanks to Interface Spoiler, it's not even guaranteed that you won't figure out the twists just by reading what's below. With that said, read at your own risk.

Margo: I still love you. But this breaks my heart.