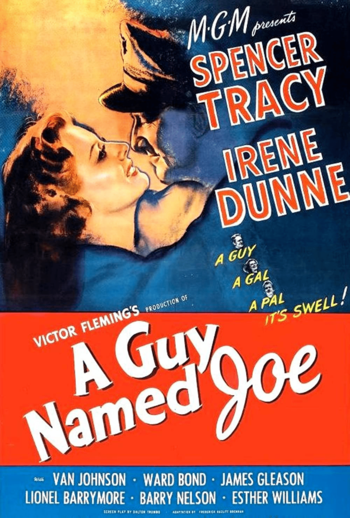 Pete Sandrige (Tracy) is the commander of an American bomber squadron based in England in World War II. Pete is a highly skilled pilot but he is also something of a hot dog, routinely abandoning his squadron in combat to chase off after targets by himself. He is criticized for this by his commanding officer, and by his girlfriend Dorinda (Dunne). Dorinda, herself a pilot with the "Women's Ferry Service", lives in mortal terror that Pete will get shot down.

Eventually she is right. Pete attacks a German aircraft carrier and sinks it, but is killed in the process. His soul ascends to heaven, where Ghost Pete finds out that pilots killed in flight become guardian angels and spirit guides to living pilots. Ghost Pete is assigned to be a spirit guide to Ted Randall (Johnson), a trainee pilot. Ted can't see Pete but he can subconsciously absorb Pete's advice, and Pete successfully guides him through Army flight school. Ted is then sent to New Guinea in the Pacific theater, and Pete goes with him, only to meet Dorinda again.

Star-Making Role for Van Johnson. Lionel Barrymore has a small role as the Commanding Officer, in charge of all the ghost pilots up in heaven. 46 years later this film was remade as a Steven Spielberg movie, Always, best remembered as the final film appearance of Audrey Hepburn.