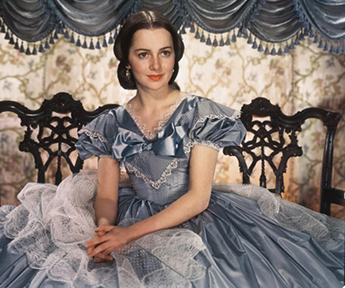 "I feel like a survivor from an age that people no longer understand. I want to try to explain what the 1930s - the golden age of Hollywood - was truly like."
Advertisement:

At the time of her death at the age of 104, she was one of the last living leading ladies of The Golden Age of Hollywood and had a career spanning over 50 years. She won two Academy Awards for Best Actress during her illustrious career, first in 1946 for To Each His Own and secondly in 1949 for The Heiress. She is best known for her role as Melanie Hamilton Wilkes in what is still (adjusted for inflation) the American box-office all-time champion, Gone with the Wind. She is also renowned for other classics like Captain Blood and The Adventures of Robin Hood, many of them collaborating with Errol Flynn. She was the last surviving performer of most of these films; for example, as of the date of her passing, GWTW has one surviving credited actor — Mickey Kuhn, who at age 7 played Beau Wilkes (son of Ashley and Melanie).

De Havilland and Flynn appeared in eight films together and were considered to be among Hollywood's best film couples. In fact, Olivia admitted to having a crush on him, but despite Flynn being The Casanova "he never had his wicked way with me." Flynn himself confessed to being in love with her in his autobiography, though he died too soon for the two of them to begin a relationship. De Havilland's responses on his mutual crush have varied; at times she claimed to have been surprised that he was also attracted to her, at other times she claimed to have been aware of it but turned him down because he was too volatile for a married life.

Olivia was also at the center of many feuds. After planning to leave Warner Bros. so she could seek out more varied roles, the studio responded by using Loophole Abuse to lengthen her contract for every part she rejected. De Havilland struck back by filing a lawsuit that established the De Havilland Law

, freeing performers at the cost of Olivia never again being hired by Warner Brothers.

One of her largest feuds was her lifelong one with her sister, fellow actor Joan Fontaine. The two had an uneasy relationship since their childhood, and Joan had been viewed as The Un-Favourite, hence why she was not allowed to act with her birth family name. The two often competed for roles and movies and were even nominated simultaneously for an Academy Awardnote Olivia for Hold Back the Dawn, Joan for Suspicion; Joan won. The sisters remained estranged from each other, and their silence to each other during their mother's funeral cemented this for good. When Joan passed away on December 16th, 2013, Olivia stated that she was "shocked and saddened"

At the end of her life, she lived in France. She occasionally returned to America for brief appearances, such as her speech at the 75th Academy Awards

and for the 65th anniversary of Gone With The Wind, for which she provided a behind-the-scenes commentary

. Her most recent role was as the narrator of the 2009 documentary I Remember Better When I Paint. She was rather forcibly dragged back into the spotlight by the release of Feud in 2017, where she was deeply offended by her portrayal and sued FX. She was also the oldest person ever to be awarded a damehood, which was announced about two weeks before her 101st birthday. She passed away peacefully in her sleep a few weeks after her 104th birthday in July 2020.

De Havilland films with their own trope page: