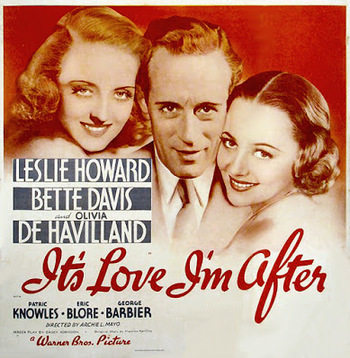 It's Love I'm After (1937) is a little gem of a Screwball Comedy / Romantic Comedy starring Leslie Howard, Bette Davis, and Olivia de Havilland. It was directed by Archie Mayo and was based on the story by Maurice Handline, Gentlemen After Midnight.
Advertisement:

A fawning fan, Marcia (DeHavilland), sets her eyes on Shakespearean actor, Basil Underwood (Howard), inducing him into in a series of disasters as he tries to keep various promises. First, to be faithful and marry his leading lady, Joyce (Davis), and second, to help Marcia’s fiancé, Henry (Patric Knowles), crush Marcia’s unstoppable infatuation by being a veritable cad. Of course, Basil can’t do this all alone, he needs his trusty valet, Digges (Erie Blore), to help him with this zany scheme.

This is the third pairing between Howard and Davis and a rare comedy for them both. Howard and DeHavilland would work together again two years later in Gone with the Wind, playing Ashley and Melanie Wilkes.

It's Love I'm After shows the following tropes: