But I Would Really Enjoy It 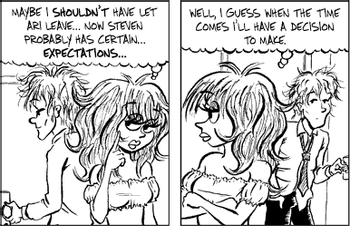 We can't imagine what that decision will be.
"I shouldn't be around him, I might do something I regret. I mean, I'd enjoy it, but... I'd regret it. I mean, I'd really enjoy it, but, oh, I really would—"
— Kerry Hennessy, 8 Simple Rules, "Closure"

Perhaps a character doesn't want to change her relationship. Maybe she's trying to force her partner into doing something. It might be illegal. Or possibly she's Genre Savvy enough to know the consequences. In any case, there's a reason why this character — on an intellectual level — doesn't want to have sex with somebody.

But she has trouble resisting her urges.