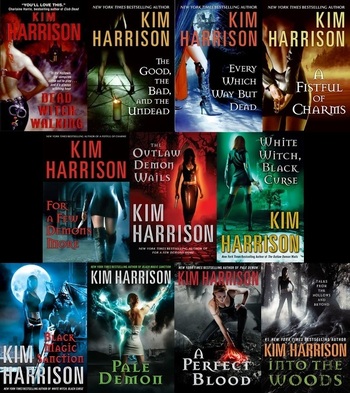 "The cuffs are used for work."
"Hello. You've reached Morgan, Tamwood, and Jenks of Vampiric Charms, independent runners."
''Our history is that of humanity's. We didn't just drop out of the sky in '66; we emigrated in through Ellis Island. We fought in the Civil War, World War One, and World War Two—some of us in all three. We suffered in the Depression, and we waited like everyone else to find out who shot J.R..
Advertisement:
But dangerous differences exist...''
"We're all pulling for you. The odds are running two hundred to one you make it through the week. Personally, I give you a hundred to one."

The Hollows is an Urban Fantasy series by Kim Harrison detailing the professional and personal adventures of Rachel Morgan, bounty hunter and witch, along with her partners: living vampire Ivy Tamwood, and Jenks, a pixie.

The books are set in an alternate universe where The Space Race was a biotechnology race instead, and various supernatural beings known collectively as "Inderlanders" have lived alongside mundane humans since ancient times, but kept their identities secret from the masses. In the 1960s, a virus called the T4 Angel was accidentally released, attached itself to a genetically modified tomato, was transported worldwide, and wiped out a quarter of the human population in an event known as "The Turn". Since the Inderlanders were mostly unaffected by the virus and found their combined numbers were now close to that of humanity's, they decided to reveal themselves to the world, a move that further changed the already altered post-pandemic society.

Warning: Due to the author's extensive use of The Reveal in the series spoilers abound.

This is the subject of a magnificent call back in a later book when Plan A fails again.