Literature / Holmes on the Range 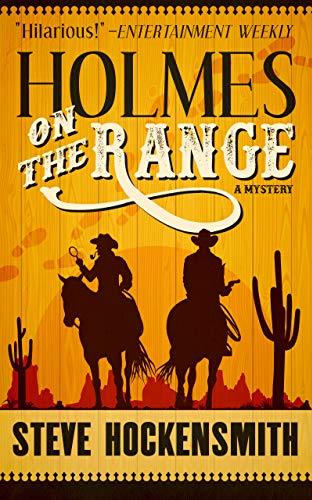 Otto "Big Red" Amlingmeyer, a German-American cowboy in the 1890's, finds himself stuck as The Watson to his brother Gustav "Old Red", a taciturn (yet illiterate) detective studying the methods of Sherlock Holmes. The brothers gradually make both friends and enemies throughout their cases, which provide a mix of action-adventure, comedy, and detective fiction. The novels follow the brothers' journey from wannabe sleuths to near Great Detective status.

1. Holmes On the Range: The brothers are hired by a ranch, owned by absent English aristocrats, and observe lots of mysterious behavior from the regular employees. Then the ranch manager dies in a mysterious stampede, the owners of the ranch arrive for an inspection, and the brothers find themselves investigating their first big case.

2. On the Wrong Track: Working as railroad detectives, the Amlingmeyers' encounter train robbers, a famed Pinkerton Detective, a woman who is not what she seems, a Chinese archaeologist trying to bring home some priceless artifacts, and more.

3. The Black Dove: A friend's murder in Chinatown has the brothers and their new associate Diana looking into Dirty Cops', Tongs, and a mysterious missing prostitute.

4. The Crack in the Lens: The brothers journey to look into the years old death of Old Red's fiancee, encountering a resentful lawman, sinister pimps, and strong indications of a local Serial Killer.

5. World's Greatest Sleuth: The brothers find themselves competing with lots of other detectives, including their old friend Diana, to win a $10,000 prize, and some much needed publicity. Instead, they get involved in a deeper mystery when the contest organizer turns up dead.

6. The Double-A Western Detective Agency: Now working as part of a larger agency, the brothers journey to take a job that lands them in the middle of a race-fueled range war.

Holmes On the Range contains examples of: