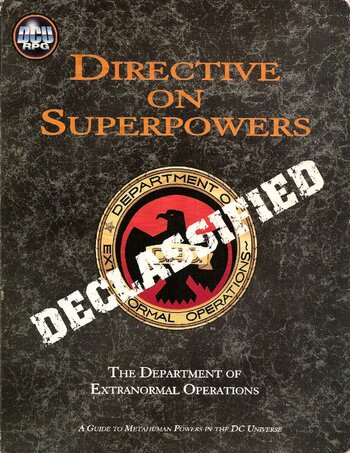 So secret it doesn't even exist.
INS Agent: You ever heard of Division 6?
Police Officer: There is no Division 6. This is bullshit.
INS Agent: Yeah.
— Men in Black
Advertisement:

This trope covers two kinds of government agency, those that are entirely fictional, and current genuine agencies described in a fictional way.

They are often shown in the same way, either as obstructive bureaucrats, or the Government Conspiracy. Many of these will only be seen as the organization behind our heroes, paying their wages and Hero Insurance and assigning them missions (such as the first few on this list), providing occasional backup (such as S.H.I.E.L.D. in the Marvel Universe), or hunting for our unusual heroes (because they're aliens secretly operating on Earth, say). Sometimes they'll just be inventing silly walks.

By some odd quirk — reflecting a similar tendency in Real Life — any randomly selected GAF has a high chance of having its name reduced to a Three-Letter Acronym.

This organization may employ The Men in Black, or barring that, the Covert Group with Mundane Front. Or there may just be No Such Agency on the books.

The Psychonauts are a government organization of Psychics who protect the world from paranormal threats.

The Psychonauts are a government organization of Psychics who protect the world from paranormal threats.