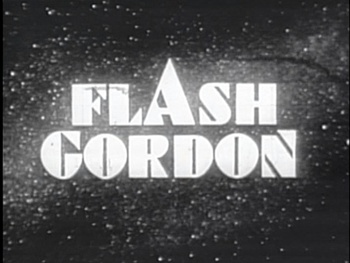 Flash Gordon was a 1954 live-action TV series loosely based on the comic strip of the same name.
Advertisement:

It featured Steve Holland, Irene Champlin, and Joseph Nash as Flash Gordon, Dale Arden, and Dr Zarkov, agents of the Galactic Bureau of Investigation in the 33rd century, travelling among the planets of the galaxy fighting crime and thwarting invasions. (The planet Mongo and its merciless emperor, mainstays of most versions of Flash Gordon, were nowhere to be seen; this series was produced during the period when the comic strip had left Mongo behind, and Flash & co. were doing a lot more planet-hopping. The strip would return to Mongo in later decades.)

The series was an International Coproduction, filmed on the cheap in West Berlin and later in Marseilles, which is why when the inevitable "our future heroes visit the present day" episode rolls around it's present-day Berlin they land in and not one of the great cities of America.

Not to be confused with the film serials of the 1930s, which were also shown on American television in the 1950s (under the title Space Soldiers, as this series had dibs on the title Flash Gordon).