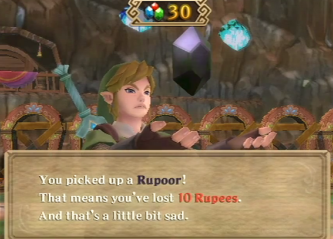 "Damn, now I can't make the payment on my horse."
"We'll either be real strong, or real sick."
— Pac-Man and Mrs. Pac-Man before trying the super power pellets, Pac-Man: The Animated Series
Advertisement:

An item which harms the player who picks it up or uses it instead of helping them. Differs from Power Up Letdown in that the harm it causes is direct and intentional, rather than from a design flaw.

So, if it's harmful, why would anyone pick it up or use it? Players don't mean to, but poison mushrooms have four main ways of getting around that:

Whatever their method, it's a Power-Up that powers you down instead. Contrast with Chest Monster, which is a monster that disguises itself as a Power-Up or other item, and Power-Up Letdown, which is a Power-Up with positive effects, just not positive enough to be useful. Compare Cursed Item.