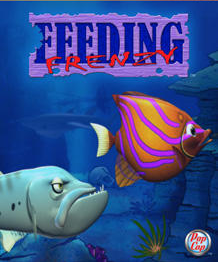 Time to climb up the food chain!
Feeding Frenzy is an arcade-style video game released in 2004 by PopCap Games. It allows the players to take on the role of Andy, a tiny yet voraciously hungry purple angelfish who must chew his way through the sea by eating smaller fishes. As you progress in the food chain, you take on the role of bigger and more powerful marine predators and must defeat the Shark King.
Advertisement:

The game was successful enough that it got a sequel called Feeding Frenzy 2: Shipwreck Showdown in 2006. Featuring improved graphics, more fishes and colorful marine life, and all-new characters, the player must once again eat everything in sight as they try to discover a mystery lurking in the ocean's depth that is causing a disturbance in the oceanic food chain. Both games were later re-released in 2006 for Xbox and Xbox 360.