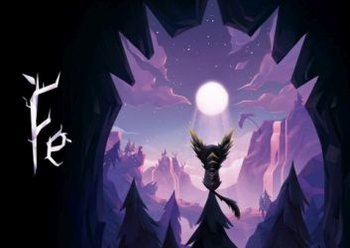 In a distant land, there existed a forest where plants and animals lived in musical harmony. But one day evil entities named The Silent Ones came in and began to pose a threat to the forest's plants and creatures. Enter Fe, a fox-like creature who can sing and interact with the creatures and plants of the forest. Singing to each creature and plant will help Fe gain a special new ability which can be used to explore more of the game.
Advertisement:

Fe was developed by Zoink! Studios and was the first game under Electronic Arts' new EA Originals platform. The game was developed as an allegory about the relationship of humans with nature and the concept that everything in the world is connected. The game is notable for having no spoken dialog or written instructions of any kind to assist players.

Has nothing to do with the chemical element iron.