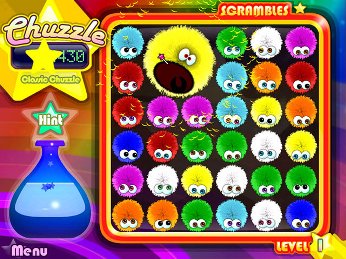 Don't ask why this player had to use a shuffle on the FIRST LEVEL.
Chuzzle

is a Casual Video Game from Raptisoft Games, and published by PopCap Games for computers (in both CD-ROM form and through Steam). Like so many other Match Three Games, the player lines up groups of 3 or more like-colored Chuzzles to clear them from the board. However, rather than flip-flopping or turning the individual Chuzzles to make matches, the player drags an entire row or column to align the Chuzzles. Thus, any combination of Chuzzles will remove them from the board as long as at least one is adjacent to another.
Advertisement:

Clearing out a 2 x 2 block of Chuzzles will drop a Fat Chuzzle onto the board; they take up a 2 x 2 space and move two rows/columns at once when you move them. Clearing out 5 or more Chuzzles at once will leave behind a Super Chuzzle which will blow up when matched and clear out a 3 x 3 area, along with any Fat Chuzzles in the chain. Clearing 6 or more Chuzzles at once will net you extra points and move you through the level faster.

As you progress, the game will increase the difficulty by randomly locking Chuzzles, which freezes their row and column until you make a match with it. If you run out of moves, you get two chances to scramble the board, which also removes all the locks. Additional scrambles can be earned at certain point levels.

There are four main game types:

A sequel, Chuzzle 2, was released on iOS and Android on December 18, 2018, introducing many new game modes and features.