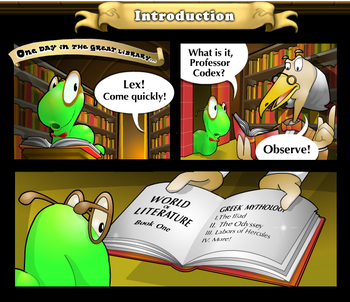 The Intro
Green bookworm Lex, the mascot of the previous PopCap game Bookworm, is back for more word-creating action in 2006's Bookworm Adventures, but with RPG-style combat added to the mix.
Advertisement:

Lex's adventures begin with a quest: save Cassandra the oracle, who has been kidnapped by an unknown evil. With the aid of Professor Codex's magic pen, he jumps into the books of the Great Library to search for her, defeating enemies along the way with words created from a 4x4 grid of letters. The longer the words, the more powerful Lex's attacks are.

As Lex progresses through each book chapter (ten per book), the monsters (in the first book, Oedipus Lex, based on Classical Mythology, with the second, Arabian Knight, of Arabian Nights and the third, Lexonomicon, of Gothic Horror) get more difficult, with a boss fight at the end of every chapter. Fortunately, Lex also becomes stronger; he occasionally levels up in HP, attack, or defense and obtains a nifty treasure at the end of every chapter with various beneficial effects. Additionally, every book has optional minigames, unlocked once Lex has completed a certain number of chapters, that can be played for prizes.

The plot also thickens the further Lex seems to get in his quest; while it's fairly linear and relatively simplistic compared to pure RPGs, each book adds one or two twists to it and the resulting plot is a bit more complex than you would expect of a game with a bookworm as the main character.

Of course, Bookworm's major appeal is the word making, and Bookworm Adventures upholds that tradition very, very much with bonus sparkly gem tiles and much better chances to piece together 10+ words. A free trial and/or purchase of the game is available here

A sequel, Bookworm Adventures Volume 2, was released in 2009. The three books in this installment are Fractured Fairytales (which interestingly includes Alice in Wonderland), The Monkey King (based on Chinese Mythology), and Astounding Planet (based on Science Fiction). It also differs in adding companions that perform a beneficial action every four turns and rainbow tiles that function as wildcards.