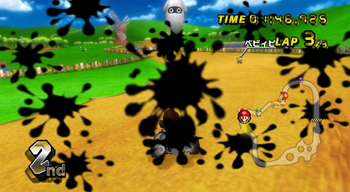 An event in a video game where the controller buttons are switched around, or the player's display is interfered with.

This may be one of the Status Effects. When it's done well, it can be entertaining, funny, or even terrifying. However, done poorly, it may break game immersion and cause frustration. If it makes the game noticeably more difficult to play, then it can be considered a form of Fake Difficulty. If such a status effect is available for the player to use on enemies, expect for it to either do nothing at all due to the lack of an interface between the AI and the game, or cause deliberate Artificial Stupidity to compensate for this. Sometimes used as an intentionally created glitch. Can be utilized by Multiplayer Only Items. If this is done because the player character has been injured in some way, that's Injured Player Character Stage. If the player's controls have been temporarily limited in order to focus their attention on exposition, that's Expository Gameplay Limitation. If the Interface Screw is caused by the player character consuming a mind-altering substance, that's Intoxication Mechanic.

Super-Trope to Static Screw. Compare Camera Screw and False Camera Effects. Some of the examples will overlap. Justified if the game uses a Diegetic Interface.

In the next chapter, Wilfre messes your first attempt in the game at creating a hero in the village, destroying the interface and then making the puppet useless due to turning it colourless.

In the next chapter, Wilfre messes your first attempt in the game at creating a hero in the village, destroying the interface and then making the puppet useless due to turning it colourless.