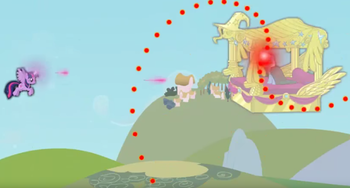 is a fanmade My Little Pony: Friendship Is Magic side-scrolling, horizontal Shoot 'Em Up made by the fairly notorious MLP fangame maker Futzi01, and released for PCs online in 2013.
Advertisement:

The game's (very thin) plot follows Princess Twilight Sparkle, the player character, on her quest to find the Elements of Harmony, which have gone missing. Her journey will take her to locations ranging from Ponyville to the moon itself, and pit her against many old opponents (and one new, formidable threat) in epic sky-high duels of magic blasts. There are also swarms of, uh, some kinds of evil geometric shapes. Don't ask.

Somewhat unusually for a shooter, no power-ups drop from enemies (the only pickups in the game are full health restores before the bosses), however the enemies do occasionally drop bits which can be used to buy scrolls in a shop accessible between stages, teaching Princess Twilight a few new spells and upgrading her health. Boasting six stages, this game one of Futzi's longest creations. While it's still not particularly long to beat, it is not an easy game by any means, so if you want to take it on, be prepared for a challenge.

It has an (almost) entirely original soundtrack