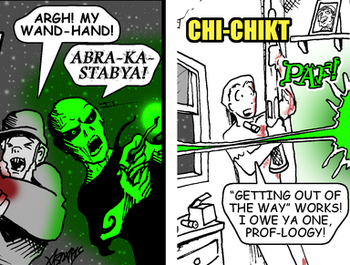 No defense except dodging!
Advertisement:

One of the many ways Functional Magic varies between settings is what range spells can be cast from, or how exactly they find a target. In some stories, the Wicked Witch may simply be able invoke a spell's name (or point her finger) and — poof! — somebody's been turned into a frog. (There may be other rules involved — maybe she needs direct eye contact, or to be within easy speaking distance for it to work. But that's not what this trope is about.)

This trope is when magical spells are treated a lot like modern bullets or projectiles ("magic missiles", if you will): A physical manifestation of magical energy is launched through the air and flies towards its target, and only by physically hitting someone (or something) does its effect take hold on them. As a direct result, it may be possible to evade the spell by simply leaping out of harm's way (or, alternately, if the mage's aim was a bit off) while the magical energy continues onwards and strikes something less fortunate. Many other tropes associated with physical projectiles also start to apply, too: The would-be victim can dive for cover behind an obstruction, block it with a Bulletproof Human Shield (or a bystander takes the spell in their place), and so on.

Of course, the most popular side effect of this is that a person may be able to deflect the spell itself (often with a simple mirror) and/or send it right back to the caster — like a magical analogue of the Misguided Missile.

If a spellcaster knows that their spell can be potentially dodged, they may opt to launch a whole flurry of them at once to compensate — creating a Magic Missile Storm.

MOBA games term these abilities "skillshots". Most are linear, but some have unorthodox movement patterns. Most can travel through walls.

Kammy can fire magical projectiles to damage Mario and his partner.

Kammy can fire magical projectiles to damage Mario and his partner.