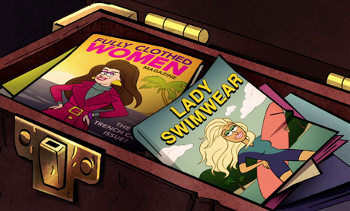 "Ew! Pretending I never saw that."
Buffy: The Pagan Rites, checked out by Alexander Harris.
Xander: Alright, alright, it's not what you think.
Willow: You like to look at the semi-nude engravings?
Xander: I guess it is what you think.
— Buffy the Vampire Slayer, "The Witch"
Advertisement:

The obvious answer is "find something that's almost as good and work with that". After all, if it works, it works. There are three main variants of this trope.

In British Media, this trope is still prevalent due to Values Dissonance and Ofcom regulations including the watershed, so not entirely discredited.

. You can see how the occasional recognizable object would come into sight.