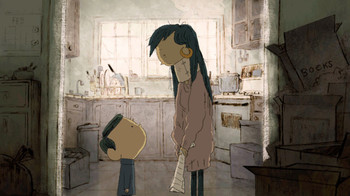 It is a story about divorce, set in the mid-1980s. The central character is a small boy living in Toronto, who spends his weeks with his mom but on the weekends goes off to stay with his father. Given the total lack of communication between his parents when he's picked up and dropped off, they are most definitely not Amicably Divorced. His mother seems more businesslike, studying accounting, while his father likes to watch cheesy kung fu movies and play video games. Each parent acquires a new mate. The boy for his part has to navigate a life now defined by a broken home.