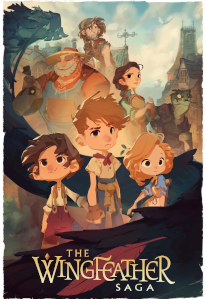 The story centers around the Igiby siblings. The eldest, Janner, dreams of adventures which come true when his younger sister, Leeli, runs into a Fang, and his younger brother, Kalmar, stumbles onto a map that may lead to the Jewels of Anniera.

The short can be seen here.

The animated short provide examples of: