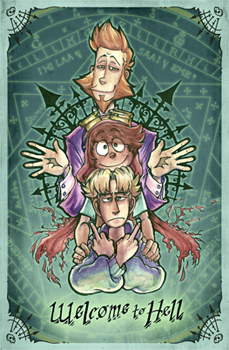 From top to bottom: Mephistopheles, Sock, and Jonathan.
Not pictured: 9 minutes and 46 seconds of crazy Black Comedy.
Sock: You mean, I get to kill people?!
Mephistopheles: Nnnnot exactly... You get to help people kill themselves.
Advertisement:

Welcome to Hell follows the story of Sock, a sweet but unstable teen who commits suicide after the Accidental Murder of his own parents. In Hell, he meets Mephistopheles, the amicable manager of the underworld, who offers him a job: Sock is to become a demon, tasked with haunting humans and driving them to suicide. At first this seems like Sock's dream job—a way he can finally act on his desires without consequence—but after meeting his first target, a disinterested high-schooler named Jonathan, he finds himself with another desire that just might be stronger... and just might have a consequence.

Welcome to Hell started as a Webcomic on DeviantArt. Some pages are posted on DeviantArt and have garnered some really good responses as well as two Daily Deviations. It was then given successful funding through Kickstarter to make a fully-animated Short Film.

The animation can be seen here.

The webcomic can be read here.

Its Tumblr production blog is here

.One of the largest fanblogs is here.

This series contains recurring examples of: