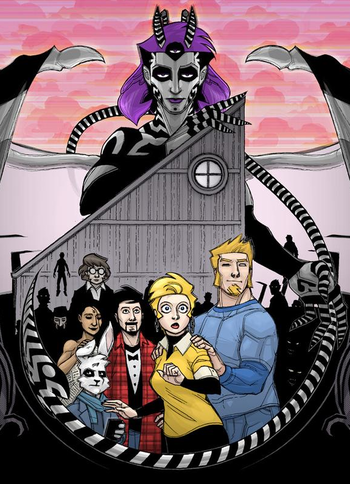 tells the story of three roommates (Sandra, Jack, and Crystal) whose lives are irrevocably transformed when they discover an ancient magical tome in their attic. When the book is slammed shut after an accidental demon-summoning, Sandra finds herself transformed into the eponymous Zebra Girl, a demon with black-and-white striped skin, hooves for feet, long, wicked talons, acidic bodily fluids, and the ability to set things on fire with her mind. Jack, blaming himself for the incident, devotes himself to the study of magic in hopes of finding a way to cure Sandra of her transformation, and along the way becomes a powerful archmage and the only hope of restoring magic to the world at large. (Or possibly staving off a magical apocalypse; Sandra isn't the only demon running around.) And Crystal is... well, Crystal.

Started out as a rather dark gag-a-day strip, but became afflicted with Cerebus Syndrome in record time, as Sandra and the others discovered that being transformed into/living with a demon is most emphatically not all fun and games. By all accounts, this only made it better, as the storyline took twists and turns and the world gradually warped around the protagonist trio, thrusting them into the middle of a veritable supernatural maelstrom that they attracted simply by existing in their current states.

Joe England, the comic's creator, released a few "Tales of the Wooden Castle" strips as part of the epilogue, and hinted late 2021 that he wanted to create a sequel to Zebra Girl, named "The Curse of Clarity", as well as a spin-off in the same universe called "Witch Wrap", which should be released before the actual sequel.

Note: The comic hosting has changed since this page was started, so quite a few of the links are now broken. The original domain redirects to the current domain, but old links will bring up the latest page. Unfortunately the archives do not use the actual dates of the comic pages after 2003 until March 2016, so anything between those dates will have to be re-discovered the hard way.
Old format: http://www.zebragirl.net/?date=2013-02-23
New format: http://www.zebragirl.thecomicseries.com/comics/579