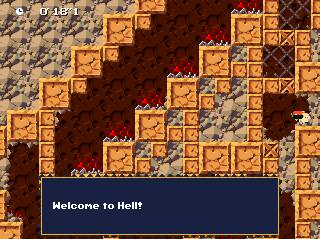 Perhaps the most self-aware example on this page.
"Welcome to D'ni. You and I will live here...forever."
— Atrus, Myst (if you enter D'ni without the white page.)

A Stock Phrase used when one character welcomes another (whether as a threat, sarcastically, or otherwise) to some kind of bad situation. For example, a cop welcoming the new guy to the precinct (a la RoboCop) or a villain threatening the hero (sometimes with a literal hell).

Often used to describe That One Level. Compare See You in Hell.

Not to be confused with the webcomic and animated short Welcome to Hell.

In this case, is a penthouse full of heavily armed mooks and lasers everywhere (and if you touch the latter, BOOM — you're dead) where your usual tactics of bullet time and diving around will get you very, very dead in short order.