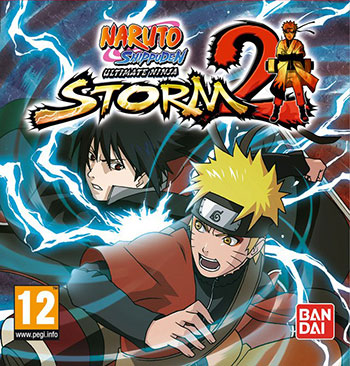 Naruto Shippuden: Ultimate Ninja Storm 2 is an Action-Adventure and Fighting Game sequel for Naruto: Ultimate Ninja Storm, released for PlayStation 3 and Xbox 360 and based on the Naruto Shippuden anime, developed by CyberConnect2. If you want to know what the story is about you should really head over to the manga's page, but the gist of it is that the main character (Naruto) is a ninja aspiring to earn the Hokage ("fire shadow") title, or in other words, become the leader of his village. And then it turns out there's an malevolent Beast of Mass Destruction inside of him, friends betray him, shadowy organizations start hunting him — and all of this before the part of the plot this game deals with.

The game storyline spans the events from the first episode of Shippuden (the sequel to the original Naruto anime) to episode 175, though omissions and additions can be found here and there. The player mainly takes the role of Naruto (though at times, you get to play as other characters of the series). The story begins as Naruto and Jiraiya, Naruto's perverted teacher, return to their home village after two-and-a-half years of training. From that point on, Naruto matures and becomes stronger as the story progresses.

The gameplay is somewhat the same as the original, with the ability to run free within the battlefield as well as the use of battle items and "Ultimate Jutsu" (such as Futon: Rasenshuriken, Chou Odama Rasengan, Amaterasu and Kirin). Out of battles, you can collect all sorts of items—including materials to create items, "Memory Crystals" which show key moments of part one, "battle records" which let you face past battles and "story records" to watch the cutscenes of the game's main storyline. You are able to explore the Hidden Leaf, Sand, and Rain Villages and speak with game characters and civilians.

This game is followed up by Naruto Shippuden: Ultimate Ninja Storm Generations, which addresses the Substitution problem in Storm 2 and expands the cast of characters from the beginning of the series up to a bit after where Storm 2 leaves off. It also doesn't have the cinematic boss fights that this game had for the fact that CyberConnect2 wanted to make Generations a more traditional fighter, and the fact that the team that made the cinematic boss fights became the main team for Capcom-published game Asura's Wrath. And Now You Know. (The boss fights are back for Naruto Shippuden: Ultimate Ninja Storm 3, on the other hand.)