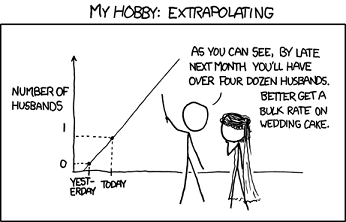 By the third trimester, there will be hundreds of babies inside you.
"There are three kinds of lies: Lies, Damned Lies, and Statistics."
—attributed to Benjamin Disraeli
Advertisement:

It has been generally demonstrated that, because human brains are wired toward pattern detection, we are lousy at intuitively interpreting statistics; this is the main reason why casinos are viable businesses. Trying to do anything to curb this problem often results in the worship of the Random Number God, or beliefs like:

Note that while this often makes fun of the developers messing up at statistics or the author having no clue how it works, this can actually be invoked or justified.

Compare Lies, Damned Lies, and Statistics, when statistics are not just used incorrectly, but are manipulated to get certain results.

Examples of how this plays out in storytelling:

The shortening of the Lower Mississippi he is talking bout is the actual length of the watercourse. It is continually being shortened or lengthened over time by changes in its path, for instance a wet spring or summer may cause an oxbow to be cut through, shortening the river, while in a dry year, a bend or curve may be increased, lengthening it.