Music / Food for the Gods 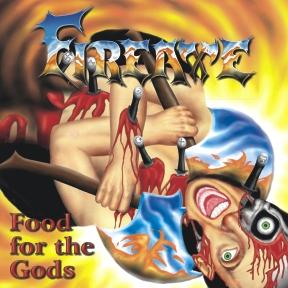 Food for the Gods is the fourth album by band Fireaxe, released in 2003. And it is epic. Not epic in the sense that it's really cool, but epic in the proper sense of the word. The full album is 4 hours long, comes on 3 discs, and spans ancient Assyria and their war with Babylon, Ancient Egyptian pharaoh Ankhenaten's brutally enforced switch to monotheism, and Israel's conquest of Canaan under Joshua. And that's just disc 1.

The first two thirds of the album explores the role of religion in human history and the wars we have fought in the name of our gods all the way up to the modern era, including a few story arcs that take place 20 Minutes into the Future which continue with this theme. These culminate with all life on earth being exterminated by some unnamed superweapon at the end of the second act. The third act follows the devil himself leading an army of damned souls to heaven storming the pearly gates, laying waste to the angelic host, and trying to kill God himself.

The album is available online for free by the creator, who encourages you to pirate it. It can be found here

The Troper of Pain