Think of the Censors! 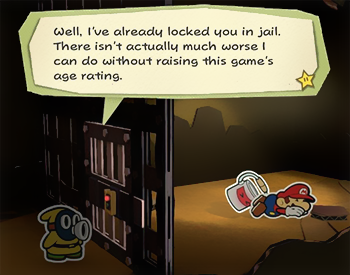 Writers who have to deal with Media Watchdogs on a daily basis love nothing more than to make fun of the folks who ruin their fun, usually by slipping in something that they hope the censors wouldn't notice.

This trope, on the other hand, is the inverse of that, where the writers allude to something that would upset the censors, but instead have the characters Breaking the Fourth Wall by acknowledging the censors themselves and how they wouldn't like what the characters are about to do, usually be mentioning the work's intended age group, its timeslot or sometimes even the parent company. Ironically if you think about it, this means that discussing the subject is allowed, but the actual act is not.

This often shows up in cartoons, sometimes as a form of Parental Bonus. In older cartoons this was done as a reference to The Hays Code, but in other media it can also reference The Comics Code and the Entertainment Software Rating Board.

A variation (or justified one, depending on your view) is if the characters are in the company of someone who shouldn't be exposed to naughty language.

Supertrope of You Wanna Get Sued? (where the characters realize that mentioning something copyrighted or protected by law will get them in trouble). Compare Too Hot for TV, Our Lawyers Advised This Trope, Narrative Profanity Filter.