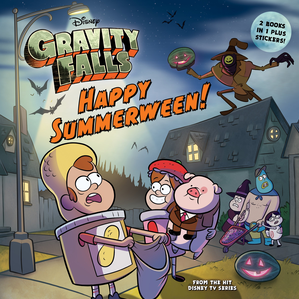 "You must trick or treat... Or die!"
"Summerween" - It’s Gravity Falls’ version of Halloween in Summer with Jack-o-Melons and lots of trick-or-treating. Dipper and Mabel are excited to join in on the fun, but when Wendy casually mentions that trick-or-treating is for kids, Dipper’s whole outlook on the evening changes. The night gets even more complicated when a monster that Dipper accidentally insulted makes them fulfill his candy quota by night’s end or else he will eat them. Meanwhile, Stan tries to scare away the kids who come over to ask for candy.