Too Old to Trick-or-Treat 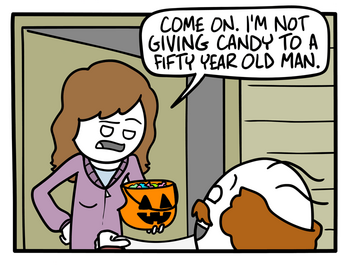 "When you go from tween to teen, you say goodbye to Halloween."
— Tina Belcher, Bob's Burgers
Advertisement:

Halloween is a tradition enjoyed by many people of all ages, although younger children are the usual target audience for trick-or-treating. With kids carving pumpkins, wearing spooky costumes, and telling scary stories, you might think that this holiday is only for kids. That's what this trope is all about.

This trope occurs when an older child or teenage character (usually about 10-17) decides they are too old to trick-or-treat on Halloween, usually due to peer pressure. There may be clues to their dissatisfaction, such as not fitting into their old costumes, not being scared by the decorations, being unhappy when they get substandard treats (such as rocks or Razor Apples), or just not getting into the holiday spirit anymore. A variation occurs when a whole group of characters decides that they are too old to trick-or-treat, but one character does not and tries to convince the group that anyone can trick-or-treat.

This is Truth in Television, as many kids and teenagers have felt or been told they're "too old" to trick-or-treat or do Halloween-related activities, even when younger kids around them get to do things like parades, parties, and costume dress-up.

A common plot for a Halloween Episode. Expect an Aesop about how you're never too old to do what you love. Occasionally results in a crappy holiday. Usually a form of Age-Appropriate Angst. Compare Dreaded Kids' Table. May overlap with Bittersweet 17.

, where Protoclown argues one is never too old to enjoy Halloween, and writes about his and his friends' experiences trick-or-treating as adults, along with the costumes they wore each year.
Video Games
Webcomics
Web Video
Western Animation
Feedback