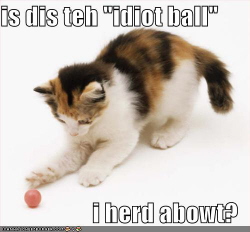 Tropecat found teh Idiot Ball, but she did not eated it.
"Oh, oh, and you know what else I found on the web? It's these pictures of cats and they write these — Oh, look at this one. 'Invisible cheeseburger!' No, huh? Well, it's not for everyone. I just think they're funny."
— Dr. Heinz Doofenshmirtz, Phineas and Ferb
Advertisement:

LOLcats are an Internet meme which is best described as the lovechild of Cute Kittens and Memetic Mutation. Lolcats are Image Macros that combine photos of cats with humorous captions, usually in a form of broken english known as "kitty pidgin" or "lolspeak". It should be noted that using bad spelling as humour is hardly a new phenomenon. And the practice of combining cats with funny captions

◊, goes back even further. However, the modern-day phenomenon of LOLcats originates from the image board 4chan, where every Saturday users posted funny pictures of kitties, a practice called "Caturday". This didn't become a sensation until the launching of the website I Can Has Cheezburger?

which takes its name from this popular image.

(scroll down a little bit)

"), which is widely regarded as being "the first language born of teh intertubes", along with a programming language

and even a kitty theology, complete with its own Bible translation

.Just don't do it in real life.

There's been an article on them