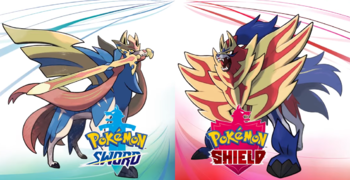 Forge a path to greatness!
Advertisement:

Pokémon Sword and Pokémon Shield are the first set of Generation VIII games in the main Pokémon series. Released for the Nintendo Switch on November 15th, 2019, they are the first original mainline Pokémon RPGs created for home consoles. note Pokémon Colosseum was the first console RPG in the series, but it and its sequel were Spin-Offs. And while Pokémon Let's Go, Pikachu! and Let's Go, Eevee! were the first mainline entries on a home console, released the previous year, they were just remakes of Pokémon Yellow with elements from Pokémon GO, rather than an original adventure. The games are set in the Galar region, based on the United Kingdom.

Mega Evolution and Z-Moves have been removed and replaced by a new battle mechanic known as "Dynamaxing", wherein a Pokémon temporarily appears to grow to giant size, granting increased HP and more powerful variants of its usual moves; some Pokémon receive unique "Gigantamax" forms with unique moves. In addition, some wild Pokémon can be encountered in a permanent Dynamax state and fought in a Max Raid Battle with up to four players. Taking a cue from the Let's Go games, Sword and Shield feature an extensive "Wild Area" in conjunction with normal Routes, where players encounter wild Pokémon via "symbol encounters" in various sub-areas. These are also the first games in the series to have version exclusive Gyms, with Sword having Fighting- and Rock-type Gyms, and Shield having Ghost- and Ice-type Gyms.

For the first time in the series, there was a strict restriction on the Pokémon available for use: over 450 Pokémon could not be caught or traded into Sword and Shield at the time of release, with the available creatures solely consisting of the 400 Pokémon within the Galar Regional Pokédex. Over eighty moves, not counting the aforementioned Z-Moves, were also made unusable.

The announcement trailer can be viewed here

, and the Dynamax trailer here

. An animated web series based on the games titled Pokémon: Twilight Wings premiered on YouTube on January 15th, 2020.

On January 9, 2020, it was revealed that in place of a traditional third version or sequel, the games would receive the series' first instance of paid Downloadable Content in the form of the Pokémon Sword and Shield Expansion Pass. The Expansion Pass consists of two new campaigns, Isle of Armor and The Crown Tundra, and include the return of over 200 Pokémon - including Legendaries - to the roster (100+ per campaign), plus new Galarian and Gigantamax forms. Players who don't own the Expansion Pass will be unable to capture these Pokémon, but will be able to obtain them through trading and Max Raid battles. New tutor moves, clothing, and the ability to make Apricorn Poké Balls will also be included in the Expansion Pass. The Isle of Armor was released on June 17, 2020, while The Crown Tundra was released on October 22, 2020. New editions of both versions, each containing the base game and both campaigns, were released the following month, on November 6, 2020.

Tropes associated with Pokémon Sword and Pokémon Shield are: