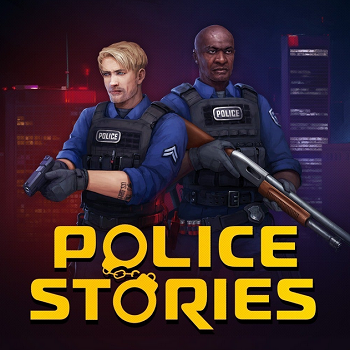 It's near the end of The '90s, and recent Police Academy graduate John Rimes has joined the local precinct with his best friend and partner Rick Jones for his first day as a police officer. Together they take on crooks around the city, and gradually uncover a sinister conspiracy.

...so sets the scene for Police Stories, a top down shooter developed by the Russian studio Mighty Morgan and published by HypeTrain Digital. It was funded

on Kickstarter on July 2nd, 2017, and released on September 19th, 2019 for PC through Steam and for Nintendo Switch, with the versions for PS4 and Xbox One expected in the near future.

You control one of a two man team, responding to multiple crime scenes with armed perpetrators. Much like the SWAT series, however, you are expected to arrest suspects as a default course of action; multiple less-than-lethal items are at your disposal to take down more stubborn perps and civilians, and lethal force is only allowed as a last resort. Not that you'll want to get into an actual gunfight, because you can take a few bullets before dying, and in the close quarters distance the crooks' aim is about as good as yours. Combined with how the levels are re-randomized each time you die, the game makes for a terse, Nintendo Hard, experience...

Not to be confused with Jackie Chan's classic Police Story.