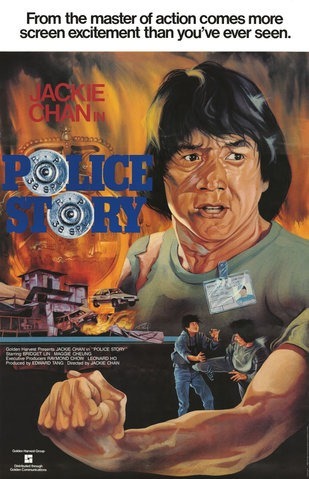 Police Story is a landmark 1985 Hong Kong action comedy directed by and starring Jackie Chan. It introduced the Royal Hong Kong Police Force officer Ka-kui "Kevin" Chan, who Jackie used as his character in the Police Story series until First Strike in 1996, before the series was rebooted with a Darker and Edgier take in 2004. Out of all the films in his long career, Chan has declared it his favorite film that he ever helmed.

The story involves Chan's involvement in a C.I.D. sting op on drug lord Chu Tao, which goes spectacularly awry, and leads to a chase that ends up with Chan pursuing, boarding, and stopping a bus Chu and his thugs have hijacked. Chu is arrested, but there isn't enough hard evidence to lock him up, so Chan's higher ups devise a plan use Chu's secretary Selina (Brigitte Lin) as a prosecution witness and as bait for Chu to send his hitmen. Chan is sent to guard her on escort duty, and to covertly record her confession.

This doesn't go exactly as planned, and much comedy ensues, partly involving Chan's bickering with his ill-tempered girlfriend May (Maggie Cheung), eventually leading to Selina skedaddling on the morning of Chu's trial. With no witness, and some rather dubious taped "evidence", Chan is defeated woefully by Chu's conniving lawyer Cheung, and Chu goes free.

Unfettered, Chan is determined bring down Chu, but in attempting to track down Selina, who has become too much of a risk for Chu's operation anyway, he falls into a trap set by Chu's gang to frame him for the murder of Inspector Man, a paid-off cop who was in on the scheme from the start. Chan is able to allow Selina to escape, but is caught and drugged by Chu's nephew Danny and his thugs. Now a wanted man, Chan must catch Chu, evidence and all, before his fellow officers catch him first. Then there's a fight in a shopping mall...

Jackie Chan uses everything he can get his hands on, such as mops, dragon heads, drywall, and of course a stepladder.

Jackie Chan uses everything he can get his hands on, such as mops, dragon heads, drywall, and of course a stepladder.