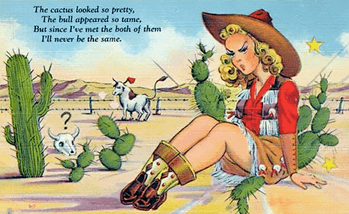 Cacti (or cactuses, singular cactus) are members of the plant family Cactaceae, which can occur in a wide range of shapes and sizes and often live in extremely dry environments, thanks to their many adaptations to conserve water. They can be a lifesaver in places where they are found (and luckily, All Deserts Have Cacti in Fictionland), but not without grave risk — most have lost true leaves, and what leaves they do have are modified into spines. Lots and lots of spines.

Needle-less to say, you can easily imagine what would happen if you bumped into one — or worse, sat on one.

Whenever a cactus shows up in a fictional work, there's a very good chance that it's going to hurt someone at least once. This is more common in comedic works, especially cartoons, where a character will find themselves landing on one — almost always butt-first — and end up leaping sky-high and later having to pull the spines out. Cacti have caused injury in more serious works as well, however, and the results are often a good deal bloodier and much less funny. There is even at least one case where a cactus bought about someone's death, as Snopes explains here

The Sea Hurtchin is the underwater version of this trope, and the Prickly Porcupine is the animal version. All of these are Sub-Tropes of The Spiny (and Spikes of Doom in turn), and are Truth in Television examples of those tropes in Real Life.

See also All Deserts Have Cacti, which may overlap with this trope sometimes.