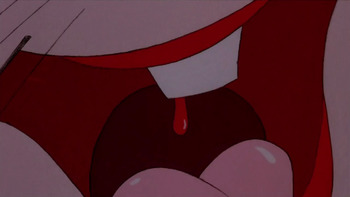 This is typically what you see right before everything goes dark.
Edd: You should know better than to eat the camera. Just think of what it could do to your digestive tract!
Ed: Oh, I can't wait to see that part, Double D.
Edd: Yes, well, let's not and say we did, Ed.
— Ed, Edd n Eddy, "An Ed Is Born"
Advertisement:

This is a visual effect where a shot is ended by having the screen zoom into a character's wide-open mouth or vice versa, usually while this character is screaming or singing. Usually done in animation, since, among other things, it's likely to be a Gross-Up Close-Up in live-action. Or, it can be used for a seamless transition to another scene through an inversion. Normally done with a wiggling uvula (that wiggly thing in the back of the mouth). .

Sometimes, it is done to represent something or someone literally entering a character's mouth (either Swallowed Whole or Orifice Invasion), or to show an Attack the Mouth move; usually, however, it is solely a visual effect (similarly used with eyes, noses, open doors, and motion picture screens). It's also done to transition to commercial breaks in television shows.

Not to be confused with Mouth Cam, which is technically its opposite, or Mouthscreen, which is a shot on the mouth, or Chewing the Scenery. Sub-Trope of Body Wipe. If somebody is literally eating a camera, that would be an Extreme Omnivore.