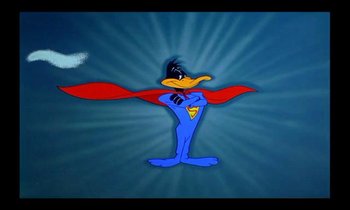 Don't be fooled. Despite how awesome he looks, he's just as daffy as ever.
"Up there in the sky!"
"It's a birrrd!"
"It's a plane!"
"No! It's Stupor Duck!"
"Yes, it's Stupor Duck. Possessing extraordinary powers, this strange being from another planet is... faster than a bullet... more powerful than a speeding locomotive... able to leap the tallest buildings!"
Advertisement:

In a parody of Superman, Daffy plays "Stupor Duck", a being faster than a bullet (shown as a popgun), more powerful than a rickety locomotive, and gets his cape snagged on a flagpole while leaping over a building. When the idiotic hero thinks he hears the threats of a diabolical villain named Aardvark Ratnik (actually a character on a soap opera his Editor boss was watching), Stupor Duck sets off to stop his campaign of destruction, only to inadvertently blunder into Amusing Injuries every step of the way.