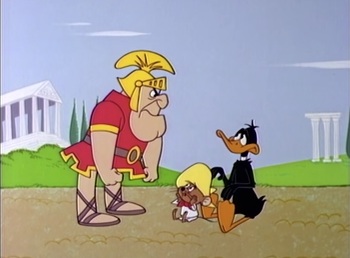 What a way for Daffy and Speedy to go out...
Advertisement:

"See Ya Later Gladiator" is a 1968 Looney Tunes animated short film starring Daffy Duck and Speedy Gonzales, who had been paired together in a series of cartoons from 1965 to 1968. This was their final theatrical pairing, as well as the final cartoon to star "classic" Warner Bros. characters. After this short, until the cartoon division closed in 1969, new characters like Cool Cat, Bunny and Claude, Merlin the Magic Mouse, and a few one-shot cartoons made up all of WB's output.

The plot concerns Daffy and Speedy accidentally being sent back in time via a time machine to Rome, 65 A.D., where Emperor Nero plans to feed them to the lions as entertainment in a gladiator arena. Daffy and Speedy work together to thwart the lions and manage to make it back to the present. However, Nero has accidentally returned with them, and joins Speedy's band by playing his fiddle.

Not to be confused with the Time Warp Trio book of the same name.