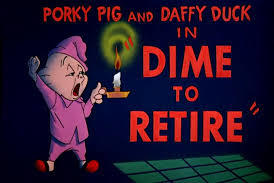 "Dime to Retire" is a 1955 Looney Tunes short starring Porky Pig and Daffy Duck. It was directed by Robert McKimson.

When an exhausted Porky reaches a nearby town in his travels, he finds that there seems to be no hotel with a vacancy, all except one run by Daffy, which only costs a dime per day. After settling into his cozy room, Porky finds it hard to believe that Daffy can afford to rent his hotel so cheap. However, he soon discovers there's a catch...

"Dime to Retire" provides examples of: