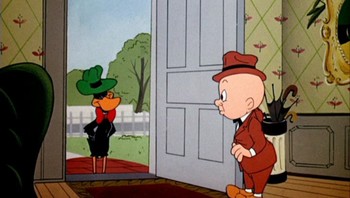 "Design for Leaving" is a 1954 Looney Tunes cartoon staring Daffy Duck and Elmer Fudd. It was directed by Robert McKimson.

Daffy is a push-button salesman who converts Elmer's house into a push-button home free of charge (and without Elmer's consent). However, as he demonstrates each new household gadget, he only ends up putting Elmer in pain and wrecking his house.

"Design for Leaving" provides examples of: