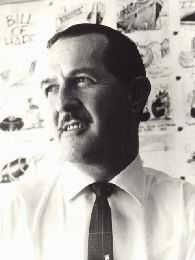 Robert Porter "Bob" McKimson Sr. (October 13, 1910 – September 29, 1977) was an American animator and director who is most known for his work at Warner Bros. on the Looney Tunes series. His "Hillbilly Hare" is generally regarded as a classic outing for Bugs Bunny.

McKimson was an animator at Termite Terrace from almost the beginning, and had a knack for detail. For an example of his work, see the start of "What's Cookin', Doc?" when Bugs performs all the celebrity impersonations. He also was one of the animators on the classic short "A Corny Concerto" directed by Bob Clampett. There's a professionalism to the animation, and the graceful movement emphasizes Bugs's likeability. He also drew the definitive Bugs Bunny model sheet in 1943 (which ironically he didn't use himself when he began directing; see below). McKimson's versions of the classic Warners characters generally seem rounder and fatter than most of the other directors' (though it was Bob Clampett who introduced the infamous "Fat Elmer"), with rather small eyesnote his characters have a tendency to peer out through half-closed eyelids, at least in his earlier period.

McKimson took his first shot at directing on a Wartime Cartoon in 1945, the obscure "The Return of Mr. Hook" (which was strictly a cartoon meant for the troops to see and not the general public); his main directorial debut is generally considered to be the 1946 short "Daffy Doodles", taking over Frank Tashlin's unit (Tashlin had left the studio in 1945). For almost fifteen years (1950-1964), he, Chuck Jones, and Friz Freleng were the main directors at Termite Terrace, and due to the post-1948 television package that many networks used during the '70s-early '90s, McKimson's work, like the other two directors, was often seen on TV.

Despite these merits, as well as directing the third most shorts out of all the directors (141 total), McKimson isn't recognized as much as the other two "big" directors at WB. Part of this may be the fact that he never had a feature-length compilation film that highlighted his work; Chuck Jones had one film and Friz Freleng had three (it should be noted that two of Friz's movies featured McKimson's cartoons, however). Part of this may also be due to his post-1955 shorts, which featured slower timing, simpler animation, and less interesting direction than his pre-1955 output note Explanation: WB briefly closed in 1953 and temporarily laid everybody off. Unlike Jones and Freleng, McKimson basically had to restart his unit from scratch when WB reopened its cartoon unit, so that certainly put him at a disadvantage for a while, not least because his new unit was mostly made up of the animators that Jones and Freleng didn't want. He also gave few interviews before his death, which made it difficult to get an insight into his directing methods and philosophies. Luckily, a vintage interview on Michael Barrier's website

, along with a biography

written by Robert McKimson Jr. released in 2012, rectify that.

McKimson created Foghorn Leghorn, Hippety Hopper (a recurring adversary of Sylvester whom he mistook for a giant mouse), and the Tasmanian Devil. In all three cases, he directed every outing for those characters. McKimson also created Speedy Gonzales (inspired on a pair of Mexican brothers he played polo with who were very friendly and excitable and, despite most outward opinions, was not meant to be a stereotype of all Mexicans), who was later finalized by Friz Freleng and Hawley Pratt as the sombrero-donning speedster we know today. Even as late as 1968, McKimson was creating new characters in the hope that they would catch on and become recurring (which, sadly, didn't happen, as the era of theatrical cartoons was waning, thanks to television). His Bunny and Claude (a parody of Bonnie and Clyde) and Rapid Rabbit characters are examples of this. He also directed two Road Runner cartoons (Rushing Roulette and Sugar and Spies), among 14 not directed by Jones (11 were directed by Rudy Larriva and are despised and/or forgotten about by amateur and professional theatrical cartoon fans alike, and one was directed by Friz Freleng), as well as the bumpers for The Road Runner Show.

McKimson was the only animator from the Looney Tunes glory days to come back for the brief revival and sad end of the animation unit in the late 1960s; he directed the very last Looney Tunes short: a Cool Cat cartoon called, "Injun Trouble (1969)". After WB closed its animation department forever, McKimson went back to work for De Patie Freleng Enterprises, where he directed many Pink Panther shorts.

McKimson died of a heart attack in 1977 while having lunch with Friz Freleng and David H. DePatie. Only a few days earlier, his doctor told him he was healthy and could expect to live a long time. He bragged to Freleng that he would outlive him.

Unfortunately, he never lived long enough to see animation respected as an art form, which debatably occurred starting in The '80s and brought fame to Freleng, Jones and Tex Avery (and eventually Clampett, too).

Robert McKimson (and his cartoons) provide examples of: