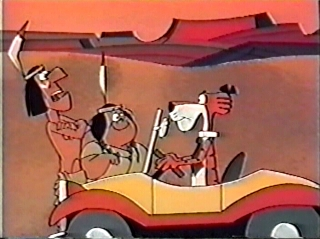 The Not-So-Grand Finale of the original Looney Tunes.
Advertisement:

"Injun Trouble" is a 1969 Merrie Melodies cartoon, starring Cool Cat and directed by Robert McKimson. It is notable, if only for being both the 1000th Warner Bros. cartoon released, the very last cartoon released by the original Looney Tunes studio, and the rarest one to find.

Cool Cat is driving to the town of Hotfoot one day, when his route happens to take him through an Indian reservation. Two scouts spot him and one of them gives chase, only to fall into a chasm when the weight of him and his horse causes the makeshift bridge to collapse. Cool Cat rescues them and continues his journey. He misses the "pail-face" but encounters a man who tries to give his obese daughter away, a man with an arrow in his scalp, a Native American who uses a stenograph-like device to create smoke signals which read "Cool Cat go home," a more attractive woman that invites him for an "Indian Wrestle" (which turns out to be a fight with a man who is far larger than Cool Cat), a Groucho Marx imitator and a literal bareback rider.

Finally, arriving in Hotfoot, Cool Cat spots two horses playing human shoes, and a "Horse Doctor" who really is an equine. After that, Cool Cat spots a "Topless Saloon" and heads in, but finds out that the only topless person in there is the bartender, a rather burly man. An outlaw named Gower Gulch then arrives and seemingly challenges Cool Cat to a duel, but then settles for a game of poker. Cool Cat gets a good hand with four aces, but Gulch has a royal flush. Announcing that he is "cutting out," Cool Cat produces a pair of scissors and cuts a hole out of the background, which he then disappears into. He then reappears for a moment and ends the cartoon (and the original series' run) with the words "So cool it now, ya hear?"

Should not be confused with the 1938 Bob Clampett film of the same name (which was remade in 1945 as Wagon Heels).