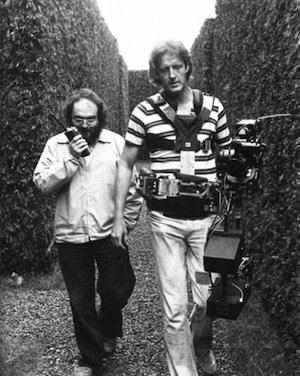 Stanley Kubrick with Garrett Brown and his invention, the SteadiCam
Advertisement:

The SteadiCam is a camera stabilization device that isolates a hand-held camera from the movement of the operator, allowing the operator to move freely without jiggling the camera. The SteadiCam allows for stable shots in places where dollies and tracks cannot be used, such as along stairs, over obstacles, and during Walk and Talk scenes. It combines the stabilization ability of a fixed tripod mount with the fluid motion of a dolly shot and the flexibility of hand-held camera work.

The SteadiCam was first used by its inventor, Garrett Brown, in the 1976 film Bound For Glory, for which its cinematographer Haskell Wexler won an Oscar. Brown himself eventually won both an Oscar and an Emmy for his invention. It is frequently used to shoot The Oner, a long continuous shot with no edits.

A SteadiCam rig for a motion picture camera consists of a harness worn by the operator, which is attached to a mechanism containing the camera and a counterweight. Tiffen also manufactures smaller versions of the SteadiCam such as the SteadiCam JR and the SteadiCam Merlin. These devices may be used with DSLRs and camcorders and omit the harness due to their light weight.

SteadiCam is the trade name for the product manufactured by Tiffen. Panavision produces an equivalent called PanaGlide, and GlideCam Industries has a variation known as GlideCam. One can also find instructions to build their own stabilizer

if they have the necessary tools and supplies.

for the details about how the SteadiCam works.