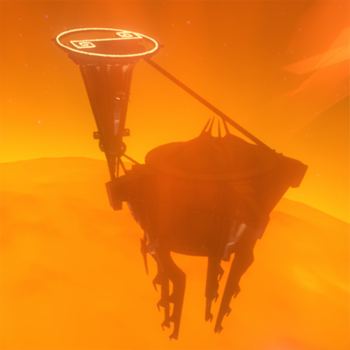 What happens when a space-faring civilization takes Space Stations to a whole new level? How about a space station around a star?

A stellar station is a type of space station that is placed in a very close orbit around its star, usually no more than several hundreds of kilometers/miles above the blazing plasma surface. Their purposes tend to vary depending on the faction who built them. They could be merely just scientific outposts that are placed there to study the star up close. They could be factories harvesting the star's material directly and using it to forge valuable resources through fusion synthesis. Or they could be a superweapon with the intent of blowing up the star and wiping out the system's civilization.

Whatever the case may be, such structures would have to be incredibly heat-resistant to stay operational and structurally-sound for long periods of time, as they tend to be located within the star's corona; its super-heated atmosphere where temperatures are millions of degrees hotter than its surface, enough to vaporize nearly anything. And, as Real Life has shown, extreme heat is not very kind to technology (there's a reason the Parker Solar Probe

is equipped with a special heat shield that protects its vulnerable equipment from the full brunt of the Sun's heat). It'll sometimes be hand waved by the stations being Made of Indestructium or having a force field of some kind, but most of the time, no explanation other than Convection Schmonvection is given about the station's incredible durability.

Note that for an example to count, the station in question needs to be in a long-term orbit around its star and using it in some meaningful way. This can include spacecraft, satellites and probes to some degree, but if they're just simply passing by a star, either as a gravity assist, an attempt to shake off pursuing enemies, or to just hurl things into the stars, then they don't count.

Compare Dyson Sphere, a megastructure built around its star to harness its energy for an interplanetary civilization.