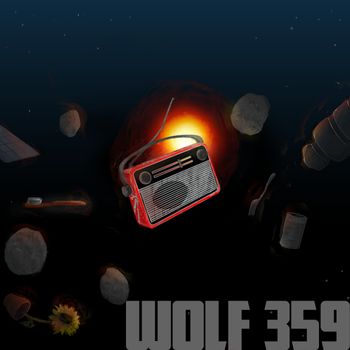 Your home away from home...seven and a half light years from Earth.
"Here I am floating in a tin can, no one to talk to except G.I. Jane, Russian Doctor Doom, and Deep Blue Barbie, and my hotel room missed the delivery area for the nearest Domino's by a couple of solar systems."
— Communications Officer Doug Eiffel
Advertisement:

Wolf 359 is a Sci-Fi Sitcom Radio Drama, with strong Horror and Thriller elements mixed in. It chronicles the adventures of the crew of the U.S.S. Hephaestus, a (fictional) space station orbiting around Wolf 359, a (real) star located 8 light years away from Earth. The stalwart team of misfits has been tasked with a series of experimental tasks and obscure mission objectives, among them searching for signs of alien life.

The show begins in an audio diary format, as we hear the various logs the crew records about the day-to-day happenings around the station. Later, it transitions into a more dialogue-based radio play. Most episodes focus on the difficulties of living in isolated deep space conditions or on the various conflicts between the volatile members of the crew. Said crew is made up by Mission Commander Reneé Minkowski, the Action Girl, Control Freak captain, Dr. Alexander Hilbert, the resident Mad Scientist and bunny-ears doctor, Hera, the station's A.I. Is a Crapshoot auto-pilot, and Communications Officer Doug Eiffel, the show's Reference Overdosed Lazy Bum and Jerk with a Heart of Gold. They are later joined by the previous commander of the Hephaestus, the Properly Paranoid Deadpan Snarker, Captain Isabel Lovelace.

The series strikes a balance between off-beat Black Humor and genuinely suspenseful and creepy stories, depending on the episode. A lot of this comes courtesy of the show's crapsack spaceship setting - sure, the show's episodes cover the day-to-day activities on the station, but on this station that can cover everything from encounters with radioactive mutant abominations, World Gone Mad bureaucratic regulations, and the increasingly difficult task of keeping their space submarine from springing a leak. Combine that with liberal doses of Paranoia Fuel and the steadily growing sense that there is more than meets the eye to the mission and the crew, and you start to get the picture.

Early installment could easily be described (for better and for worse) as an attempt to do Night Vale in space, even down to a recurring musical element. Fortunately, the most glaring of these elements faded into the background fairly quickly, replaced by a stronger focus on the interplay between the lead characters. Recent episodes can more accurately be described as what you would get if the team from Red Dwarf was stuck in the plot from Contact while working for the Cigarette-Smoking Man.

. Aside from the official webpage, the show also has a Facebook page

No connection to Star Trek, despite the Wolf 359 star system playing a pivotal role in that franchise's history, and sharing the US Navy-inspired "USS" ship naming convention.

A-G
H-P
Hera: You don't spend five weeks teaching your AI how to isolate her physical symptoms if you don't want her to develop some...quirks.
Q-Z