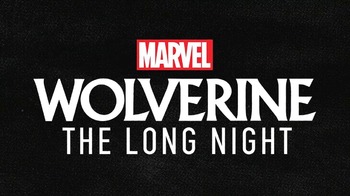 "Came here because I was running. Running from myself. But I'm not gonna run again."
— Logan

written by Benjamin Percy and Marvel's first attempt to get into scripted audio dramas since The Fantastic Four audio drama in 1974. Richard Armitage stars as Wolverine in an investigative mystery.

The first season, called Wolverine: The Long Night, is set in Alaska, where FBI agents Tad Marshall and Sally Pierce investigate serial killings that have been plaguing the small town of Burns, with Logan as the prime suspect. But as the investigation proceeds, the town reveals its layers as the investigators discover more of Logan, the wealthy Longrock family that seems to run Burns, the mysterious Aurora cult and the local mythology...

The second season is called Wolverine: The Lost Trail, bringing Wolverine down to New Orleans where he investigates disappearances with the help of none other than Gambit.

Tropes in Wolverine: The Long Night:

Tropes in Wolverine: The Lost Trail: