All Bikers Are Hell's Angels 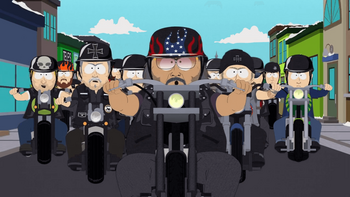 When I'm on the road, I'm indestructible. No one can stop me...
"When we do right, nobody remembers. When we do wrong, nobody forgets."
— Official motto of the Hells Angels
Advertisement:

Whenever motorcyclists are depicted in movies or on TV, with few exceptions they are portrayed as brutish thugs and criminals. This stems from the mystique of the classic "outlaw biker" of American culture. After World War II, motorcycle clubs became increasingly popular, especially with returning soldiers and airmen. In 1947, unruly bikers attending a rally in Hollister, CA, caused the so-called Hollister riot.

Sensationalized stories of the event created the perception that packs of bikers were looting and pillaging small towns across the country. These stories inspired the classic 1953 film The Wild One, which launched Marlon Brando's career and permanently ingrained the outlaw biker into pop culture.

The classic outlaw biker is a big, burly, grizzled man wearing a leather jacket and riding a Harley-Davidson motorcycle. Outlaw bikers almost always belong to a biker gang. Members of biker gangs wear the colors of their gang: a vest over their jacket that displays their gang name, insignia, and area of operation. Most gangs also have a system of patches that indicate members' various accomplishments and duties. White supremacist beliefs and symbols are fairly popular (though not ubiquitous). Bikers live for wild parties and extremely hard drinking. They support their nomadic lifestyle with the drug trade. Classic weapons of an outlaw biker include clubs, chains, and knives. Many real-world bikers carry large flashlights because legally they are not considered weapons. The best way to piss off a biker is to wear your own "colors" displaying another gang's turf as your home city. The ultimate crime, however, is knocking over their motorcycles.

Contrary to public perception, most bikers are normal, law-abiding citizens. The American Motorcycle Association allegedly insisted that only one percent of motorcycle riders are troublemakers. Outlaw bikers quickly adopted the phrase "one percenter" as a badge of honor, choosing to see themselves as members of an exclusive elite. And even amongst one-percenter motorcycle clubs, only four have been designated by the FBI (and Canada's CIS) as actual organized criminal gangs: the Bandidos, Hells Angels, Outlaws, and Pagans.

It didn't take long for the outlaw biker trope to be exported to other countries. Currently the Hells Angels boast membership across 27 countries, though additional regional variants on the outlaw biker do exist. In The '60s, British "Rocker" gangs made headlines for their violent clashes with the scooter-riding Mods, but quickly faded away. Modern European bikers tend to fit closer to the "sportbike punks" style and are usually dangerous only to themselves. Bōsōzoku gangs are a subset of Japanese Delinquents and have their own unique traditions.

One stock subversion, almost to the point of being clichéd, is the grizzled old biker who's really a softy; likely with a tattoo declaring his love for his mom. Despite the suggested humor of this "wacky" juxtaposition, it's really closer to Truth in Television than it is any sort of subversion.

See also Badass Biker and Biker Media. See also Greaser Delinquents for the initial roots of the phenomenon, although greasers are associated with four-wheeled vehicles as much as two-wheeled ones.

Note: the name of the Hells Angels gang has no apostrophe.

Revenge on the Kintan Striders

"The Gathering Storm". The Kintan Striders are an outlaw swoop gang that terrorizes the people of Tatooine, and are plainly visually based on outlaw motorcycle clubs such as the Hell's Angels. Boba Fett takes revenge for their massacre of the Sand People who took him in by an air raid in his recovered Firespray gunship, wiping them out in seconds.

Revenge on the Kintan Striders

"The Gathering Storm". The Kintan Striders are an outlaw swoop gang that terrorizes the people of Tatooine, and are plainly visually based on outlaw motorcycle clubs such as the Hell's Angels. Boba Fett takes revenge for their massacre of the Sand People who took him in by an air raid in his recovered Firespray gunship, wiping them out in seconds.