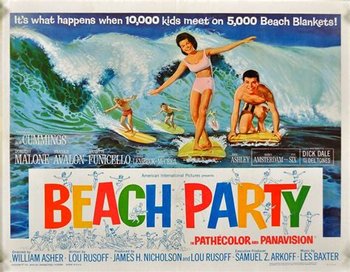 Beach Party is a 1963 teen comedy film written by Lou Rusoff and directed by William Asher. It was the first in a series of such films released by American International Pictures in The '60s.

Frankie (Frankie Avalon) and Dolores (Annette Funicello) are looking forward to a summer alone in a beach house, but when they arrive, Frankie is dismayed to find that Dolores invited all their friends to stay in the house, meaning they won't get any privacy. To get revenge, Frankie romances Hungarian waitress Ava (Eva Six). Dolores responds by dating Robert O. Sutwell (Bob Cummings), a professor of developmental biology and anthropology, who is researching the mating rituals of surf-dwellers. When Eric Von Zipper (Harvey Lembeck), the leader of an outlaw biker gang, sexually harasses Dolores, Sutwell fights him off. Von Zipper plots to defeat Sutwell.