“What? You think this assignment is going to be easy, greenhorn? I've fought these witches before, and let me tell you who else wore a stupid outfit. Superman with his underwear outside his tights. This is not a cakewalk, and if you don't shape up you won’t be coming home. I've seen skilled veterans empty entire clips and hit nothing but air. I've seen little girls walk off bullets at point blank range. And rookie, you will never ever laugh at a Barbie magic wand that shoots rainbows once you've seen those rainbows melt the flesh off a man's bones. Oh god, I can still smell it.”
— Charles Nelson, Task Force VALKYRIE captain
Advertisement: 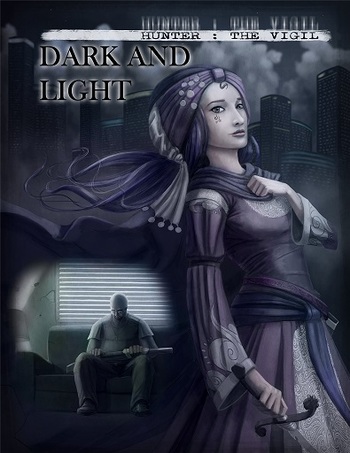 Similar to previous fan-made supplement Hunter the Vigil: Dream Catchers, this one follows the pattern of official supplements describing how Hunters interact with various other gamelines, such as Nightstalker for vampires or Spirit-Slayers for Werewolves. Unlike Dream Catchers, however, this one focuses on Hunters' interactions with a fan-made gameline- namely, Princess: The Hopeful. It is the third supplement of this kind, and the first to address the interactions between Hunters and a fan-made gameline.

Like previous supplements of this type, Dark and Light introduces its own Compacts and Conspiracies: