What Would X Do? 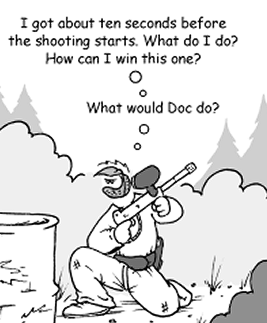 "Sir, look outside, do you see that man sitting in the green car? That's my dad. Let me tell you a story about a dream, a boy's dream: A man promised to buy his son a car if I brought up three A's and two thousand dollars. I already have the two thousand and two A's. Your B minus? Poof! Dream gone. Kaput. Now sir, ask yourself... what would Jesus do?"
— Sam Witwicky (negotiating for an A- and a car), Transformers
Advertisement:

When a character quotes someone's advice or asks what that person would do in a situation similar to theirs. That someone can be a religious figure of choice, mentors, someone known to be especially suited for such a situation, or even simply someone they idolize in general. Some characters have a tendency to do this all the time, as much as Once an Episode. (The Lancer sometimes describes The Hero in this manner when he finally gets a shot with The Leader ball.)

Because of the "What Would Jesus Do?" material in Christian homes, and other serious uses of the idea, this is an Undead Horse Trope. Opposite of Hitler Ate Sugar, when someone argues (fallaciously) that anything an evil person does is considered evil.

The Paragon, Mentor Archetype, Old Master, Ideal Hero, and anybody on the Mentor Index could potentially be the X in the equation. Of course, depending on how good a person is at judging character and what kind of values they have, theoretically anyone could be the object of imitation. It's the Sincerest Form of Flattery, after all.

Even an Anti-Role Model could be invoked, in a bit of an inversion— "What would that guy do? Go do the opposite of that!"

Compare Jesus Was Way Cool and Real Men Love Jesus for people who specifically admire the Man himself.

What Einstein Would Say

When Nerv needs money fast, he turns to a wise voice for motivation... or, so his dream-logic-y self thinks.

What Einstein Would Say

When Nerv needs money fast, he turns to a wise voice for motivation... or, so his dream-logic-y self thinks.